Last week, I asked the question: is there a correlation between covid cases and wealth (measured by revenue per student)? I was unsatisfied with that method, however, as revenue/student does not accurately convey a colleges wealth—endowment is the key indicator of a college’s wealth. I figure that colleges with higher endowments have more resources to fight Covid-19 on its campus.

As my control variable, I have endowment/student. I chose this metric, as it normalizes for school size. In other words, 500 million dollars may be good for a school of 4,000 students, but it will not support a community of 400,000 students. As my dependent variable, I have % infected—that is, out of one hundred students, how many were infected? Once again, % infected accounts for the number of students within a university. Finally, I took fifty data points, for I did not have access to a data base which gave me the endowment of each school. I had to search each data point individually.

To be sure, there does not appear to be a strong correlation between a school’s endowment/student and its infection rate. As I stated in my last report, this could be a result of testing: schools with higher endowment/student may be able to afford more and better testing than their less-wealthy counterparts. With more testing comes more positive tests. Hence, these schools appear to have high case numbers. 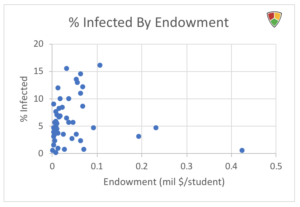 Though I did not find strong evidence concerning the connection between a school’s wealth and its ability to fight Covid—I did find evidence of a large disparity in higher education. When we think of higher education, we immediately think of the ivory tower institutions—the Ivy League, NESCAC, and other elite schools. But, for every wealthy school, there are four or five colleges struggling to get by and support their students.

C2I is here to help.

We put the “data” in “data-driven decision-making.”